Members of the WI met informally during the summer months when Covid restrictions were eased.  We enjoyed two meetings in members' gardens; once to eat strawberries and cream with a glass of Pimms (Yes, you guessed!  It was around Wimbledon fortnight!) and then to perfect the art of Stone Painting.

Our next monthly meeting is on
Wednesday 13 October 2021, 7.15pm at St Peter's Rooms
when we hope to welcome former butler to the Royal Family,
William French
with his talk
"What the Butler Saw!"

William comes highly recommended, so we are looking forward to an entertaining evening.

Look in the Gallery of photos 2019 for our activities during last year. 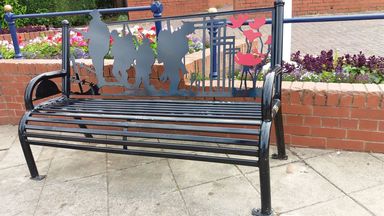 Bench commemorating those who died in World War I.
This month our walking group enjoyed a walk around the heritage trail in Stapleford.  Pictured is a commemorative bench in the main square of the town to those who perished in the Great War.  We also saw the Arthur Mee campus of Nottingham College, named after the journalist and author, who resided in the town and was best known for editing a children's newspaper.  Also, we passed Erewash Canal; and marvelled at the Saxon cross approximately 1,000 years old, which stands in the grounds of St. Helen's Church, which it predates.  We enjoyed our picnic in the local park before wandering around the eclectic mix of independent shops and having afternoon tea in a local cafe. 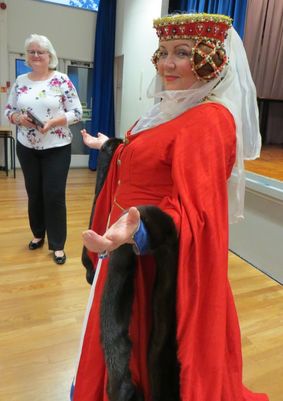 Our speaker in her role as "Katherine Swynford"
.
Keyworth W.I. warmly hosted our Hill and Highway Group Meeting on Monday 14th August, providing us with a scrumptious plated supper following the entertainment.  The speaker, pictured in the image on the left, works as a guide at Tutbury Castle, in Staffordshire.  At our meeting, she took on the role of Katherine Swynford, the long term mistress, and later third wife, of John of Gaunt.  She was totally credible and kept her audience enthralled throughout the evening.  We were told that her costume was made from genuine ermine, gold and jewels and was consequently very expensive.  As you can see, Katherine's gown was bright red: in keeping with her status as a scarlet woman!  Born around 1310 in what is now Belgium, she came to the English court and married Sir Hugh Swynford.  However, when she was widowed at a young age, she had no means of financial support and was dependent on King John. When she became his mistress, she was vilified by many and called ‘that unspeakable concubine, that witch, that whore, that enchantress’.  Following this fascinating insight into life at court, we worked on our own craft work in progress in keeping with medieval ladies like Katherine. 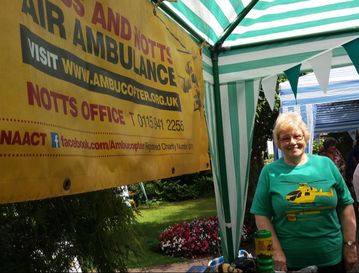 The Lincs and Notts Air Ambulance Stand at our Garden Day
On Saturday afternoon, we held a Garden Day to raise funds for our chosen charity, Lincolnshire and Nottinghamshire Air Ambulance, to help support its life-saving work in our community.  Pictured left is the organisation's stall; and more photographs from the day can be viewed here.  Visitors enjoyed a delicious strawberry cream tea sitting in the large, beautifully maintained garden.  An array of tempting stalls lined the drive and lawn of committee member, Linda Davey's home.  Our craft stall showcased work created by members at our bi-monthly meetings and included attractive gift boxes and cards.  Many thanks to all visitors who helped make this event such a success, despite the damp conditions at the end of the afternoon! 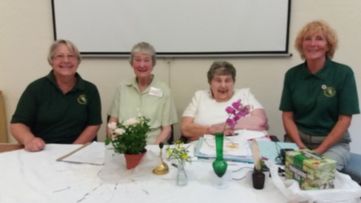 Volunteers, Anne and Dorothy, with Janet and Ivy.
We enjoyed an interesting talk by Rushcliffe Country Park volunteer, Dorothy Pearson at our June meeting.  We were given a fascinating insight into the history of the park, which was formerly the site of a munitions factory, where around 2000 people were employed producing bombs during the Second World War.  The site housed purpose built accommodation for the workers as well as the factory.  Dorothy explained how the derelict site was sold in the 1980s to the Local Authority for the nominal price of £1. Work then began with an army of volunteers to create the picturesque lake, wildlife setting and children's playground that many of us enjoy today.

Outing to Observatory at Nottingham Trent University
Posted 25 May 2017 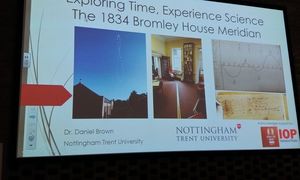 Dr. Brown's Powerpoint presentation
On Wednesday 31st May a large group of us visited the Clifton Campus of Nottingham Trent University.  We enjoyed a fascinating lecture by Ruddington resident, Dr. Daniel Brown, about his team's joint project with Bromley House Library.  Bromley House has a meridian line through a tiny circular hole in one of its windows. The project, entitled, 'Exploring Time, Experience Science,' aims to make science more accessible through outreach work in schools etc.  Also, we were treated to a tour around the observatory - and tea and delish cakes!  More pictures can be viewed here. 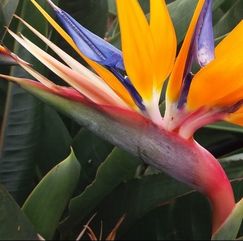 On Saturday 22 July we will be holding our annual Garden Day at 200, Loughborough Road, Ruddington: the home of Linda and Mike Davey. Everyone is welcome. Between 2pm and 4pm visitors will be served delicious home-baked afternoon teas and can relax in this beautiful garden.  There will be a variety of stalls including: cakes and preserves, crafts, books and DVDs and a tombola plus a raffle. Entrance fee is £4.50, which includes tea and scones or cake.  At last year's event we enjoyed glorious weather, and photographs can be viewed in our 2016 - 2017 gallery. 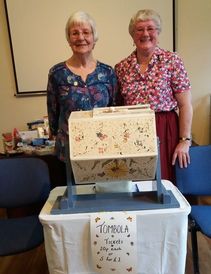 Judith and Alison on the tombola stall
On Saturday 1st April we held our annual Spring Fayre from 10am until 1pm, which was very well attended. The very reasonable entry fee of £1 included tea or coffee and biscuits, served by committee member, Sally Bryer and her helpers.  Members of Ruddington Gardeners' Club attended and sold plants and seedlings grown by members.  Linda Davey and Elaine Brown ran the cake and preserve stall, which groaned under the weight of an array of sweet treats baked by members, many with an Easter theme.  Our secretary, Janet Stafford managed our raffle, which included high quality prizes, some crafted by members.  A craft stall with items stitched and knitted by ladies who attend our bi-monthly craft group was ably run by Evelyn Bedford and Val Kirkman. Alison Smith and Judith Murdoch (pictured) organised our tombola.  More photographs can be seen in our Photos 2016 - 2017 gallery. Other attractions included stalls selling books, CD, DVDs and bric a brac. 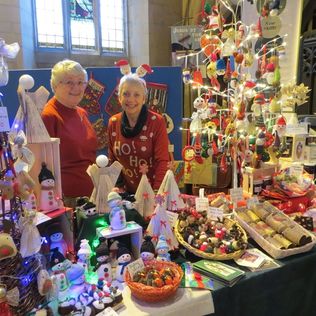 Alison and Sally sell goods crafted by members
On Saturday 3rd December Ruddington Village held its second Christmas Fayre, which was highly successful, with many local businesses taking part.  The High Street was closed to traffic and an array of stalls lined the road, including those serving Christmas treats and mulled wine.  The highlight of the afternoon was the switching on of the Christmas Lights at 4pm outside St. Peter's Church.  The Women's Institute was fortunate to have a stall inside the church. This was filled with an array of enticingly attractive Christmas goods, all crafted by our members at our twice monthly meetings on Thursday afternoons.  All profits from the sale of goods on this stall were donated to our chosen charity, the Ruddington Framework Knitters' Museum.  A cheque was presented to Kathy, a volunteer at the museum for many years, at our December meeting and Christmas party. 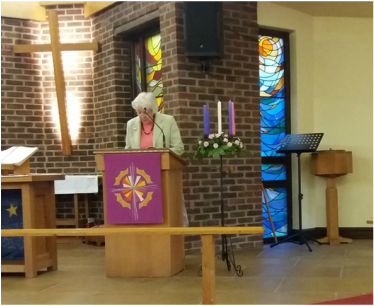 June Walters, President of Ruddington WI performs her reading
On Saturday 10th December, the Hill and Highway Group, which includes WIs in: Bunny and Bradmore, West Bridgford, Ruddington, Keyworth, Plumtree and Edwalton, came together to celebrate Christmas with a Carol Service at St. Paul's Church, Boundary Road, West Bridgford. The Rev'd Chris Hodder welcomed everyone to this beautiful modern church, explaining that he'd never before sung 'Jerusalem' with ladies from the WI. He's now ticked this off his bucket list! Representatives from each of the six WI groups performed short Christmas readings, which were entertaining and humorous.  Linda Davey, WI adviser thanked all those who'd helped make the event a success, orchestrated by our Secretary, Ivy Wilshire. Following the service members of West Bridgford WI served tea and coffee accompanied by home made mince pies. 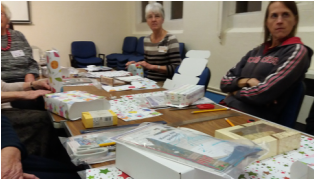 Members watch Caroline Greene as she demonstrates.
At our monthly meeting on 12th October, we had a gift wrapping workshop. Caroline Greene, of Phoenix Trading, demonstrated how to create a neatly wrapped box.  This could be easily converted into a gift bag and we were shown a few clever tricks to achieve this.  We were also taught how to make a gift card envelope and most of us produced an attractive end result with a pretty bow, crafted from matching ribbon. Some of us even managed to wrap the gift which we will donate to patients at Lings Bar Hospital, Gamston, at our Christmas party on December 14th. There are more photographs in our gallery. 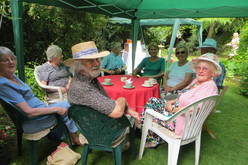 Enjoying the garden
We held our annual garden party at committee member Linda Davey's home on Saturday 23 July. The garden was a picture with an amazing array of wonderful perennials and seasonal bedding. The weather was glorious and we spent a happy afternoon sipping tea and nibbling delicious cakes and strawberry scones, prepared by our members. There was a range of stalls selling items sewn by us at our fortnightly craft and social afternoons. We raised an amazing £848 for our chosen charity, the Ruddington Community Bus. There are more photos in our gallery. 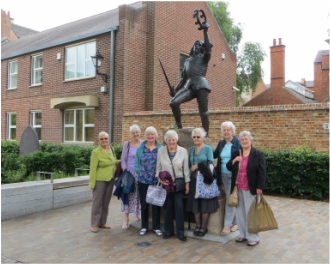 Members at the Richard 3rd exhibition in Leicester
On Wednesday 15th June, a group of members visited the Richard 3rd exhibition in Leicester, fifteen months after the reinterrment of the King in Leicester Cathedral.  Not only did the museum chronicle the events which led up to the death of Richard 3rd at the Battle of Bosworth Field in 1485, but it also gave us a fascinating insight into the painstaking work undertaken by archaeologists who discovered the King's remains in a car park belonging to the Social Services Department in the city.  We learned that Richard 3rd was rather a controversial figure as some historians believe that he was responsible for the death of the Princes in the Tower.  We also visited the Cathedral and saw the ornate new resting place of the King. More photographs can be seen in the gallery. 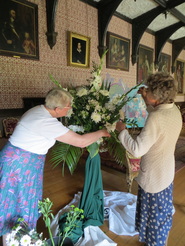 Madge would be proud
46 of the WIs in Nottinghamshire have been showing off their flower-arranging talents at Newstead Abbey. The Centenary Flower Festival celebrates inspiring women in floral displays throughout the historic rooms of Newstead Abbey - ancestral home of poet Lord Byron. I'm sure he would have been impressed with the amazing colourful representations of such characters as Billy Jean King, Marie Curie and Ellen McCarthur. Ruddington WI chose to celebrate Madge Watt the Canadian woman who brought the WI to the UK.
The photo here shows the display being lovingly created by 2 of our talented members. The event ran for 3 days giving the crowds attending plenty of opportunities to catch the exhibition and spend a little at the craft stalls in the Cloisters too.

Photos of the flowers and craft displays are in our gallery.

Today the Annual Meeting of the Nottinghamshire Federation of WIs took place at the Royal Centre in Nottingham. Almost 700 ladies representing the majority of the 115 WIs in Nottinghamshire gathered to hear news, listen to speeches, discover what events are being planned and generally have fun.
The speakers this year were a treat - the incorrigible humour of Peter Lein, head chef at Denman College in the morning and the eloquent & informative Julie Summers in the afternoon. In between there was much chatter and lots of spending at the many stalls on offer on the second floor and lots of hopeful buying of raffle tickets and Denman Dip envelopes. A display of the entries to the Sheila Norris Rose Bowl collage competition proved popular along with stands of information about Denman College, ACWW and the Centenary Baton route. The big news of the day was the Notts Fed sponsorship of a race on Ladies Day at Southwell Races on 17 August 2015 - so dust off your hat and get ready for a fantastic event.
There are lots of photos of the day in our gallery.